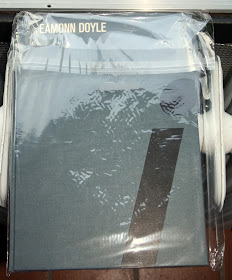 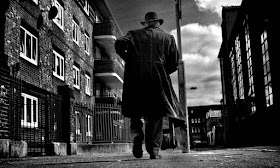 Eamonn Doyle is an unlikely candidate for the title “saviour of street photography”. When he began photographing old people passing by his front door on Parnell Street in Dublin in 2011, it was the first time he had used a camera in more than 20 years. Now 47, he had graduated with a photography diploma in 1991, but “I hadn’t really taken any photographs or read any books about photography since I’d left college,” he says, “and I certainly wasn’t trying to reinvent the genre, because I really wasn’t aware of street photography except for a few 60s photographers like Garry Winogrand and Joel Meyerowitz that I’d read about back then.”

The hardest thing of all is to get an unposed photograph. Once they look at the camera, the image is dead
The result was a self-published photo book called i – an oblique reference to Samuel Beckett’s intense short play Not I. The book comprised colour photographs of the elderly residents of north Dublin as they went about their daily business, often alone and unnoticed on the teeming city centre streets. “The one guiding idea,” he says, “was to strip away the visual noise of the street so that the people emerge in a different and hopefully more surprising way. I would always shoot on Monday morning when the streets had just been cleaned and always around Parnell Street, where I live. The pictures were all taken within a half-mile radius of my house and many of them within 10 metres of the front door. I’ve tried to make work on the south side of Dublin, around Grafton Street and St Stephen’s Green, but I couldn’t. The energy was different somehow.” 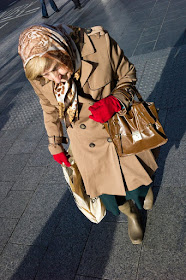 An image from Doyle’s first series, i.

In these images, Doyle’s subjects often appear to exist in a world of their own. Shot from above and often from behind as they move slowly through what appears to be a deserted Dublin, their aloneness is accentuated by the absence of the usual tropes of street photography – signage, crowds, traffic and frantic movement. “I’d noticed many of these old people over the years, at bus stops or walking along O’Connell Street. They were familiar, but then I started trailing one of two of them as they caught the bus into town, maybe to go to the GPO on O’Connell Street to buy a few stamps or pick up their pension. They had a certain poise, and I began to notice the colour and texture of their clothes. It was purely visual, but many people have told me that there is something distinctively north-side Dublin about the people, too.” 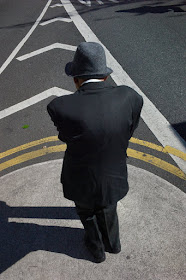 From Doyle’s first series, i.

Like many hopeful up-and-coming artists, Doyle sent a copy of his first book to the acclaimed British photographer and photo book collector Martin Parr, hardly expecting a response. It was only when he found that Parr had described i on flickr as “the best street photo book I have seen in a decade” that Doyle began to realise just how groundbreaking his images were. “Suddenly, I was inundated with orders,” he says, still sounding surprised. “I sold 500 copies online and every photography bookshop was contacting me for more. One moment, I was sitting in my bedroom staring at stacks of books; the next they were gone.” Simultaneously, another early champion of the work, well-known London photography gallerist Michael Hoppen, started to represent Doyle and show his work in his Chelsea gallery.

Now, two years – and two further acclaimed photo books – later, Doyle finds himself stealing the show at the Rencontres d’Arles photography festival, the striking images from his trilogy of Dublin street life – i, ON and End – having been transformed into a radical installation that merges dramatic presentation with an ambient soundtrack by the electronic musician David Donohoe, and abstract drawings by artist Niall Sweeney. Visitors must negotiate their way through grids of photographs on diagonal boards that divide the space, while other images have been printed so big they take up an entire wall. One of Doyle’s most striking photographs from the ON series now appears on monumental scale. In stark monochrome, it shows a group of people striding purposefully up O’Connell Street, beneath a sky streaked by vapour trails and the Gate theatre in the background. In the foreground, a muscular young man in a tight T-shirt is shot as if from ground level. His demeanour suggests aggression, but his aura is all to do with framing, composition and proximity.

It wouldn't have happened without Martin Parr. He bought some prints and got behind the book. It all flowed from there
For a self-confessed shy person, Doyle seems pretty fearless when it comes to photographing up close on the often edgy streets of Dublin’s north side, I point out. “I know,” he says, laughing, “and, often, I’m even closer than it seems in the image, maybe just a couple of feet away, but the wide-angle lens makes it appear that I’m further away. When you are shooting so close, people often assume you’re photographing something else in the distance. You can sometimes see a slight acknowledgement of the camera in their looks, but not very often. The hardest thing of all is to get an unposed photograph. Once they look at the camera, the image is dead.” 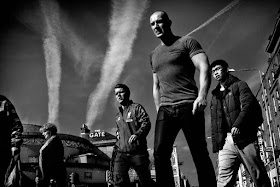 From Doyle's series ON.

Doyle’s success is all the more impressive when you consider his 20-year absence from photography. In the interim, he “fell into” a long and lucrative career in the Dublin music business. Back in 1991, he somehow managed to buy a recording studio through an early, pre-social-media crowd-funding project. “I wrote to or phoned hundreds of people asking them to lend me a tenner to invest in the studio. I managed to raise eight grand.”

Les Rencontres d'Arles 2016 review – twin towers and sub-Saharan slums
Festival director Sam Stourdze gathers a powerful response to the 9/11 attacks, while African photographic talent is showcased – and rightfully awarded
Soon, he was running his own independent techno label, Dead Elvis Records, and organising Deaf, an annual electronic music and arts festival in Dublin. His relationship with Donohoe, a musician and producer, and Sweeney, who designed the programmes for the Deaf festival, stems from this time.

“In may ways, I approached making the first photography book the way I had released records,” he says, “which was basically to go ahead and make the thing, package it, and then hope it sells somehow. I had about nine grand saved to pay for a documentary photography course I was going to take up in Belfast, but I put that into the book instead as well as the eight grand I borrowed. Looking back, it was risky and it probably wouldn’t have worked if it hadn’t been for the support of Martin Parr. He bought some prints which helped pay for the printing and really got behind the book. Everything else flowed from there.”

While all three of Doyle’s photo books are beautifully designed, with distinctive covers that eschew photography for text, graphic design and drawings, the latest, End, is the most elaborate. It contains 13 sections in a white leatherette slipcase, 23 drawings by Sweeney and a 7in vinyl record by Donohoe. “For me, the book is the work,” says Doyle, “It’s an art object in itself. The prints come later. To me, they are like glossy quotes from the book.”

With his Dublin street trilogy complete, where does he go next? “That is the big question,” he says, “Until now, it’s been me wandering around with my camera shooting instinctively.” Of late, though, the streets outside Doyle’s front door have become edgier: a Dublin gangland feud has claimed six lives in recent months. “I don’t take my camera out around here at the moment,” he says. “You pick up on the atmosphere and right now, it’s a bit tense.” For the first time since he unknowingly reinvigorated street photography, Doyle is, as he puts it, “having to figure out a way to do a preconceived idea.” He seems quietly confident.

Eamonn Doyle’s work is showing at the Espace Van Gogh at Arles festival until 25 September.


Watch a promotional video by Doyle, Sweeney and Donohoe for the photo book End. 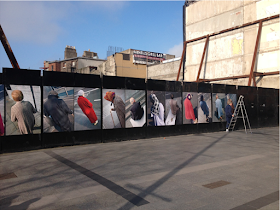 Eamonn Doyle finds a new vision of street photography with the hunched, solitary figures of one Dublin highway

Eamonn Doyle has photographed O’Connell Street, the longest thoroughfare in Dublin, for most of his life. But he needed Samuel Beckett to understand it.

“I was obsessed with Beckett when I started taking these photos,” Doyle says of the Dublin-born novelist. “Beckett understands Dublin, but he strips away the context of his characters. I was deep in that mindset, so I started taking photographs that pares everything back.”

The project started with a shot from behind; a solitary woman covered by an ornate head-scarf and powder-purple coat, shot close-up with her face hidden from view. Doyle realised then that street photography is possible from another angle.

“The older face is such a loaded cliché in this sort of photography,” he says. “With Beckett’s writing, it’s not what said that’s intriguing, but what’s not. I wondered whether you can apply that to photography.”

Although unknown in photography circles, Doyle is a bit of a local celebrity; the founder of the Dublin Electronic Arts Festival, he has run a recording studio and a couple of record labels on the adjoining Parnell Street for the past 23 years. “So you come to recognise the local characters who wander along with their own internal dialogue,” he says.

He would stand as close as he could without disturbing his subjects, standing on his toes to capture them from above. He wanted them un-posed, unaware; smoking a cigarette or crossing the road, enacting a routine or hurrying home. “If they noticed what I was doing, I’d stop straight away,” he says. “I wanted them oblivious.”

The portraits can resemble an inverted fashion shoot, as if Bill Cunningham suddenly found a social conscience. “There’s an effort and dignity there, even if some of them are quite down and out,” Doyle says of the Dubliners’ clothes. “I didn’t really appreciate that beforehand.”

Remarkably, Doyle’s photography career has been spent in monochrome – this is his first colour project. “I needed to come at it from a visually graphic perspective, because they’re very colourful people, very well dressed, even if there’s just the one suit,” he says.

Doyle’s work has attracted high praise. The celebrated Magnum photographer Martin Parr tells the BJP: “These hunched street walkers of Dublin express so much character, yet we never see their faces. It’s so simple, so powerful.

“Street photography is one of the most difficult genres to find a new vision within,” Parr says. “From time to time a photographer finds a voice and makes an original contribution to this development. Eamonn Doyle’s wonderful collection does that.”

You can see Doyle’s photographs now, blown up to huge dimensions, hanging from the buildings of O’Connell Street.

First published in the May 2014 issue. Want to complete your collection? Buy back issues at the BJP Shop. 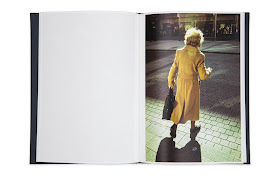 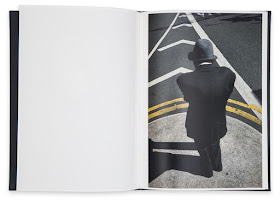 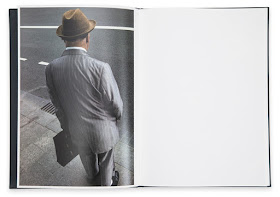 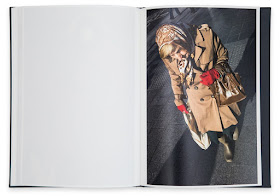 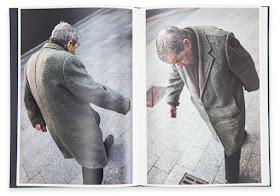 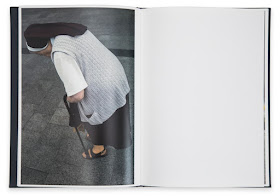 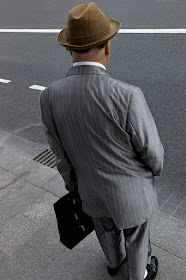 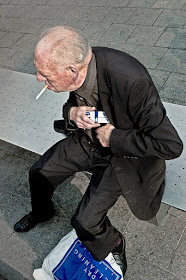 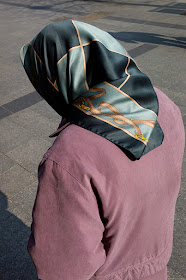 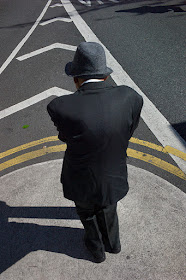 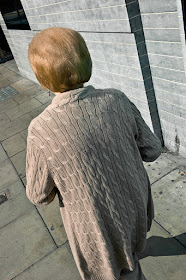 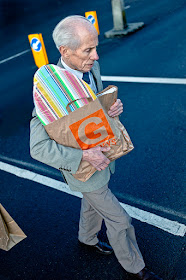 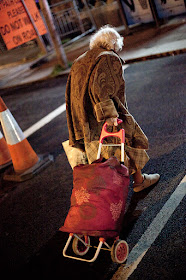 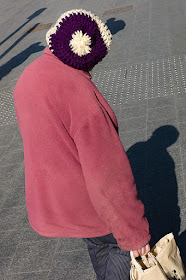 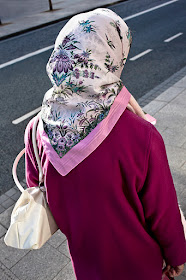 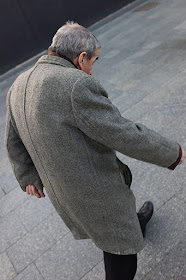 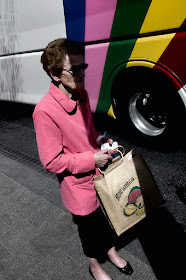 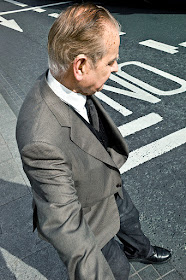 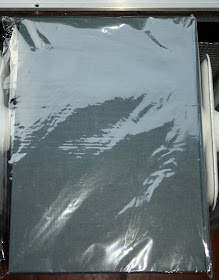